You are here: Home / About Diamond Directors / Your 3-step plan to trying new things 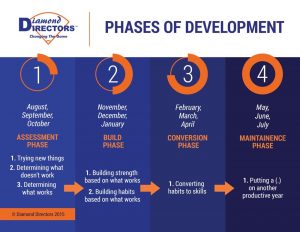 Everybody should want to try new things. This is especially important when you’re practicing to become an elite hitter. Trying new things requires you to do three things:

As a kid, I hated vegetables because all of my friends said they were nasty. I mean, why would I try something that’s nasty? Years later, as an adult, I love just about any type of vegetable. Why? Because I finally tried it.

When it comes to trying new stuff as a hitter, most kids shy away from it because they’ve heard their parents and coaches say that making change is a negative.

We wouldn’t have ever achieved the greatness of the iPhone if Steve Jobs wasn’t willing to try something new.

Believe me when I tell you that the fall is the absolute best time to try something new, especially since it is the time that you are preparing for a successful spring season.

Here’s a breakdown of my three-step plan to try something new:

No. 1 – Admit failure
Failure isn’t fun. It also doesn’t have to be final. Failure allows you to learn. As a child, I didn’t like to fail because I felt people would think that I was stupid. Today, my success is equal to the amount of calculated risk that I’m willing and able to take. All of this invites failure. I’m also fortunate to have good coaches and mentors who keep me encouraged.

No. 2 – Focus on the future
For some, dreaming is a challenge because their current mindset is based on repeated failure. That’s why a good coach is so important. A good coach gets you from one place to another.

I love using Siri on my iPhone. If I ask her to help me get to a destination by avoiding traffic, she gives me a better route.

A good coach is supposed to assess your current ability as well as help you realize what your future can be. You will never become the best version of yourself without failure.

No. 3 – Re-evaluate your commitment and discipline
Commitment is a promise you make to yourself, while discipline is doing the things that must be done, even when you don’t want to do them.

Coaches throw out the word development like its magic – no failure, no development.

Your favorite wooden bat started out as a tree, which was cut and shaped into a bat. Failure yields mental cuts and bruises, and helps you develop grit, which is the relentless pursuit of purpose.

Are you destined to become an elite hitter?