You are here: Home / About Diamond Directors / Why tempo is the key to your hitting success 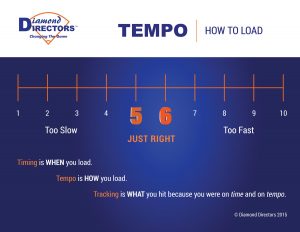 Do you know who the top three hitters for average are in the Major Leagues today? I gotta tell ya. They aren’t household names. The MLB batting leader is Jose Altuve, a 5-foot, 6-inch second baseman with the Houston Astros who weighs all of 165 pounds. Altuve is batting .360 with 17 home runs.

The second is Daniel Murphy, who may look like the guy next door, but is batting .355. The second baseman for the Washington Nationals (by way of the New York Mets) was a 13th round draft pick out of Jacksonville University in 2006.

The third hitter is Wilson Ramos, the catcher for those NL East leading Washington Nationals. Ramos is batting .337.

The one thing all three have in common is great tempo, i.e., how they load. Remember your three keys to hitting:

Tempo is all about speed. Hitters that lack discipline or skill often go too fast, too slow and/or get it just right by accident. Hot hitters like Altuve, Murphy and Ramos are on tempo with their load 90 percent of the time, with 500-plus at bats per season. That’s a skill my friend.

They also rely on three additional skills that they must maintain during the latter part of the 162-game baseball season:

Check out the tempo of Jose Altuve, Daniel Murphy and Wilson Ramos:

Here are three of my simple Diamond Directors Skill Build Drills that you can add to your toolbox. The drills are designed to enhance your tempo skill:

You can learn more about tempo right here in less than four minutes.