You are here: Home / About Diamond Directors / Why teamwork begins — and ends — with you 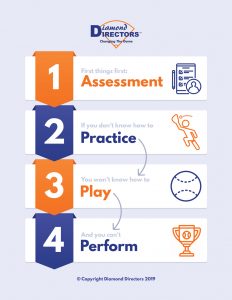 I recently watched a local high school JROTC Drill Team perform and it taught me something. As I watched the 12-15 students perform with heavy rifles in hand, I prayed that nobody dropped theirs. Halfway through the performance, a young man tossed his rifle in the air, and when it came down, he dropped it. I watched his face. It remained focused as he picked the rifle up and returned to his position without missing a beat.

There was no response from the other students. They continued to perform.

When they finished, I wondered why they did not help him. My wife, Kelli, who was on a nationally ranked high school JROTC Drill Team, told me there was two reasons they did not help. First, they didn’t drop the rifle, he did, so he should be the one who picked it up and continued. Second, each member has a specific job to do, which does not include helping others.

Too many baseball players cannot individually perform because they are too worried about helping teammates who do not perform. This focus becomes a negative distraction, preventing them from performing and thus hurting the team.

I define teamwork as individuals working in excellence for a specific goal. Excellence is meeting expectations. The specific goal is often to win the game.