You are here: Home / About Diamond Directors / Why (and how) you should dream the big dream

The 2016 MLB First-Year Player Draft is tomorrow June 9. While millions of young players dream of becoming a 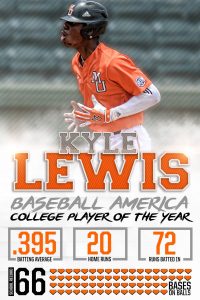 Major League Baseball player, but only 1,500 will be drafted each year, with each of the 30 MLB teams receiving 50 picks.

Subsequently, many are drafted, with few ever making the Majors.

I was drafted twice by the Chicago Cubs and never made it to the Majors, mainly due to poor character and work ethic. However, I’ve enjoyed a significant 18 year career as a professional baseball swing coach, developing and mentoring numerous Major Leaguers such as Jason Heyward, Dexter Fowler, Andrew McCutchen and Tim Beckham, to name a few.

If all goes well, Diamond Directors client Kyle Lewis will be a top three overall pick. Kyle continues to take the steps necessary to achieve his dream. Should Kyle dream of becoming a Big Leaguer or Major Leaguer? Here’s the difference:

Big Leaguer – A professional person (of high character, compassion and consistency) who plays professional baseball and wins at the game of life

The Anatomy of a Big Leaguer

Head
Sound judgement is important. Without it, swift failure is at the door, and it impacts you and others. Big Leaguers have a good head on their shoulders.

Eyes
Big Leaguers are willing and able to acknowledge everybody who sees the greatness in them. They respect their fans. Acknowledgment of others who spend their hard earned money to see you costs mere energy.

Heart
Humility isn’t thinking less than of yourself, but rather thinking of others more than yourself. Failure doesn’t look so bad on the humble.

Mouth
Wise people use their mouths well by asking for help. Rare are the times when they are perceived as being a “know it all,” because their mouth moves faster than their bat tracking a 100 MPH fastball.

Hands
You can’t give what you don’t have. Count it as a blessing to work with your hands in baseball and serve others well with them.

Feet
Big Leaguers run to win and inspire. They proudly wear their cleats for success (individual) and significance (others).

The world needs more Big Leaguers than Major Leaguers. Congratulations to all of the 2016 MLB First-Year Player Draft selections.