You are here: Home / About Diamond Directors / What it takes to be athletic 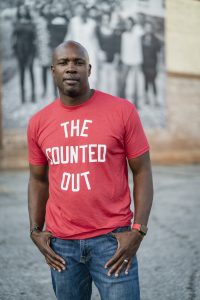 Being “athletic” can be used to describe Black baseball players in a demeaning and derogatory way. I define athleticism as being able to execute something even when you lack the knowledge to do it. Being athletic requires a high level of critical thinking and aptitude.

If you disagree with my aforementioned definition of athleticism, I challenge you to give me a better one—right here and right now.

As a child, I would watch Chicago Cubs baseball games with my grandfather in his bedroom in Southwest Atlanta on Beecher Street. We listened to the game as the air conditioner roared.

It was 1984. I was eight years old. Both the Cubs and the Atlanta Braves had all of their home and away games televised on the SuperStations back then. I’d watch the Cubs in the daytime and the Braves at night.

The Cubs won their division in 1984, while the Braves finished that season with an 80-82 record. The Cubs were my favorite MLB team because they were winning and they had several notable African-American players on their roster.

There are some people who say they are colorblind and they say it with such positive conviction. At eight, living in financial poverty in Atlanta, both sitcoms and the nightly news told me that I was Black and at the bottom in America. But baseball showed me I could climb to the top.

I didn’t see a lot of Black people on TV doing positive things other than baseball players. I saw examples of positive role models among my parents, my extended family, school teachers, coaches and church community, but they weren’t on TV.

When the Cubs game ended, I’d go outside in the Hotlanta weather and play an entire game by myself. I would use a stick and rocks and hit lots of homeruns. I struck every batter I faced throwing rocks to trees.

At my age, I didn’t have a professional baseball coach. I didn’t play on a well-manicured baseball field using hundreds of dollars’ worth of equipment.

Not only did I not have it, but nobody did. From my recollection, youth baseball started to become a multi-billion industry when I was age 16 in 1992. That’s when kids started to play Travel baseball instead of the commonplace park baseball.

Here’s the point in two sentences: Black boys being athletic is not a death sentence. It can be a mental skill that can help you pay the bills.

At age 44, my personal mission in life is to be significant by serving millions and bringing them into a relationship with Christ starting with my wife, Kelli, and our daughters Mackenzi and Mackenna.

Learn more about me at iamcjstewart.com.

To help keep your skills sharp, we have introduced a new type of Skill Build—our Virtual Skill Build, where I can help you develop hitting skills anytime, anywhere using anything. Check it out.