You are here: Home / About Diamond Directors / What are your on and off the field habits? Two coaches share their views 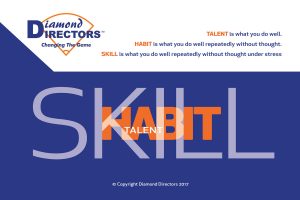 To get a closer look at how habits on and off the field can impact young players, I’ve asked two of my friends – Quinterus Vancant, head varsity baseball coach at Booker T. Washington High School  and Dash O’Neil, head coach at Georgia Highlands College coach – to weigh in on my “Super 7 Questions.”

Here’s what they had to say:

1. How do you define the word habit?

It’s a routine that’s repeated so much that it tends to occur without the person even trying.

2. What are the top three character habits you’d like your hitters to develop this winter en route to having a successful spring season?

I want my hitters to develop accountability, toughness and the ability to learn. Hitters must have the habit of accountability to understand that the work we put in as a team will not be enough. Hitters must be able to put the work in themselves to get better. Toughness is an important habit because hitters must understand that nothing comes easy. The habit of learning is highly needed. This winters hitters will learn about different points relating to their hitting.

3. What are the top three hitting habits you’d like your hitters to develop this winter?

I want them to work on balance, concentration and eyesight. A lot of things falls under concentration. Concentration can range from getting adequate enough rest the night before to blocking out distractions at the plate. Eyesight is a crucial habit to develop. A hitter must be able to see the ball and its thread clearly to be able to make a decision on where the ball will end up. Every great hitter has balance. Balance starts with your stance. Hitters must maintain their balance as they stride and swing to make solid contact.

4. What character habit did you struggle to develop as a high school and/or college hitter?

In high school it was accountability. I was passionate about the game. I loved the game. But when things didn’t go my way, I blamed everyone except myself. Looking back on it now I realized I could have taken responsibility and put it on myself. I could have used it as fuel to work harder. I never put in the work outside of practice and game experience.

5. What hitting habit did you struggle to develop as a high school and/or college hitter?

When I was in college I struggled with the habit of improving. I always felt like I had a good enough swing to be on the college level. I didn’t put in the work to improve different approaches to different pitches. I was trying to pull everything instead of taking certain outside pitches OPO.

6. What are the top three character habits that coaches must develop to be effective at teaching their hitters to develop good character and hitting habits?

As a coach I believe that a coach must develop honesty, leadership, and preparedness. As coaches your players must have trust in you and with that comes signs of honesty. Also coaches must be able to lead. Being prepared is a great habit to develop. You must be purposeful with everything you’re doing as a coach. In order to do that you must plan out everything.

7. Who was your favorite MLB hitter when you were in high school and why?

It was Derek Jeter. I loved his approach to game. With Jeter it wasn’t about power or hitting home runs. Every time he stepped up to the plate it was about what he could do at that moment to position his team to be successful. I pride myself in being just like him in high school. If I needed to move the runner over I made sure I did, whether it was a bunt or a line drive. I enjoyed watching him at the plate so much that I use to mimic my swing from his YouTube videos.

1. How do you define the word habit?

It’s a behavior or attitude that becomes embedded in one’s daily routine. Habits can be formed deliberately or unintentionally. They can be good or bad. Once they’re bad, they’re difficult to break.

2. What are the top three character habits you’d like your hitters to develop this winter en route to having a successful spring season?

For me, a good hitter has to develop a habit of focusing on his process, rather than simply looking at his results. I believe that successful hitting is a by-product of a quality process. So while we cannot expect to be perfect in our performance at the plate, we can certainly pursue a perfect process. In the winter, I ask my players to really evaluate their hitting process and to consider how their process relates to their performance.

A third habit I’d like to see my hitters develop is getting excited to face a worthy opponent, rather than seeking the easy victory. The only way to become a champion is to get in the arena against champions and compete with them. Often, the greatest difference between two talented teams or players is the attitude toward competing with each other. I ask our players to seek out and get excited about facing the toughest competition they can find and talk about the old adage that “iron sharpens iron.” In the winter, I challenge players to confront their weaknesses and to find people to work with who will push them to their limits.

3. What are the top three hitting habits you’d like your hitters to develop this winter?

I really want guys to focus on swinging with intent, zone discipline and outer third control. Swinging with intent is something I don’t see very many young hitters doing. They get in the cage, take their hacks, and get out. When you ask them what they’re working on, they often either cannot tell you or they only have a very general idea such as “trying to hit the ball hard.”

I want hitters to have a very specific intent every single time they swing the bat. A good example would be “I’m looking for pitches in the outer third of my hitting zone, and I’m trying to hammer line drives into the opposite field gap.” To me, a swing without a specific purpose is a wasted rep.

Practicing zone discipline is another habit I think is critical. I want my hitters to make discipline a habit by practicing it every time they step in the box. Zone discipline, to me, means not only laying off pitches out of your zone, but also learning to attack pitches in the zone you’re targeting. Too often hitters have it ingrained in them that they have to swing at every pitch in the cage, which slows their understanding of the strike zone and their ability to really attack pitches they can hit hard. The winter is a fantastic time to develop this habit without sacrificing game performance.

The third habit I want is what I call “outer third control.” At the NJCAA level, and I believe at other levels of college and high school baseball, the majority of pitches thrown are intended to be on the outer part of the plate. But many young hitters prefer to hit pitches that are easier to reach on the inner part of the plate. I want my hitters to develop a habit of learning how to control the outer third of the plate. They can do this in several different ways, but they all must be able to handle pitches on the outer third if they want to be successful. In the winter I task them with mastering their process for dealing with these pitches, so that in the spring I can see their improvement.

4. What character habit did you struggle to develop as a high school and/or college hitter?

A character habit I really struggled to develop in my own career was self efficacy. I had plenty of confidence in my ability to perform, but early in my college career I really worried what other people thought of my abilities. Even when I was hitting well and being productive, I’d find myself seeking validation from others. It wasn’t until I got a little older that I realized the only person I had to prove anything to was myself.

5. What hitting habit did you struggle to develop as a high school and/or college hitter?

Looking back, I think I actually devolved as a high school hitter. Leading up to high school, I walked up to the plate just about every time trying to drive a ball into the opposite field gap. I was always an exceptional hitter. The problem was that I didn’t realize that my success was really a result of having a very specific approach. I didn’t even know what approach meant. Although I was still a very good high school hitter, I took several steps backward because I failed to nurture my habit of hitting with intent.

6. What are the top three character habits that coaches must develop to be effective at teaching their hitters to develop good character and hitting habits?

Humility, patience and accountability. Coaches must develop the habit of humility – both in terms of understanding they don’t have all the answers and that their role is to serve the needs of their players rather than the other way around.

A coach must also develop a habit of patience, because improvement takes time. Quick fixes in hitting rarely last for long. A good hitting coach will allow his hitters the time they need to develop and improve. Finally, accountability must become a habit for a good coach. Players will respect a coach who’s willing to practice what they preach and who holds them accountable for their actions.

7. Who was your favorite MLB hitter when you were in high school and why?

Lenny Dykstra was my guy. Not only did he have the coolest nickname (how can you not like “Nails?”), but he was a smaller guy just like me. He played with a chip on his shoulder and was fearless on the field. I loved his hard-nosed style and how he never seemed to back down from anyone. It didn’t hurt that the first time I watched a full MLB game, he hit a walk off home run in Game 3 of the 1986 NLCS. He continued to be one of the best post season performers in MLB history.