You are here: Home / About Diamond Directors / Up, up and away… Taking an aerial look at the system of baseball 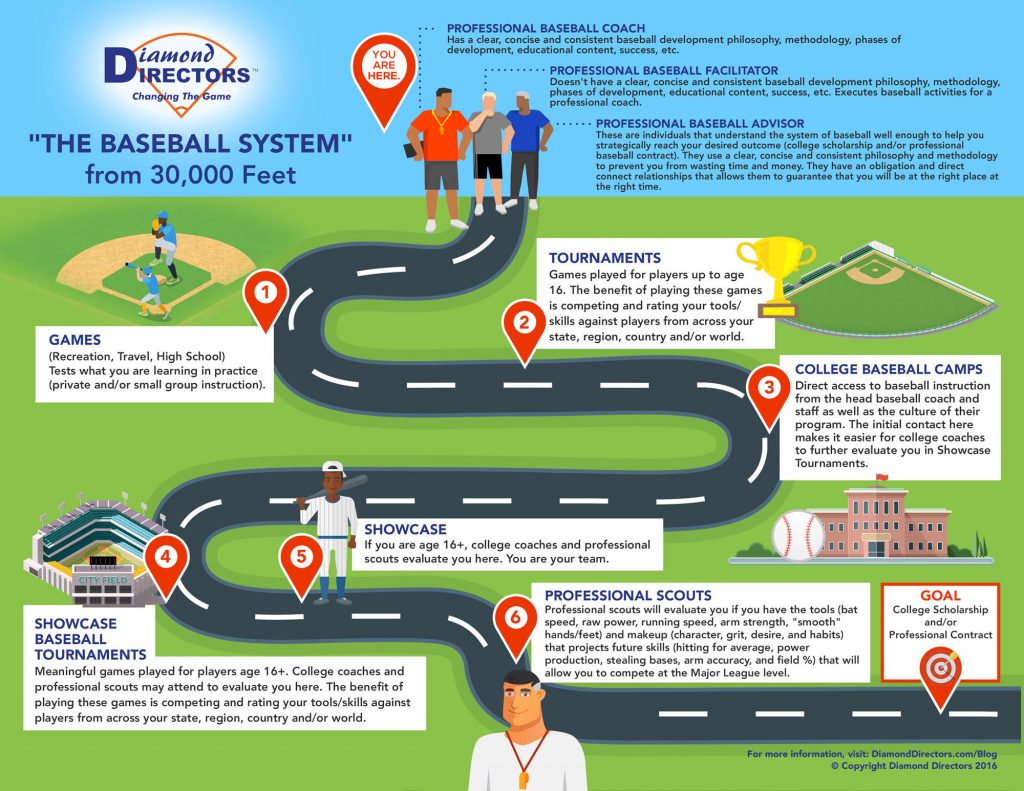 “He who owns the definition owns the movement.” – C.J. Stewart

Coach – Before the word coach was used in sports, it was referred to as a means of transportation. You had a horse and a coach that was controlled by someone. The person in charge ensured that people arrived at their destination safely.

Habit – This is an automatic reaction. For example, it takes 3,000 reps to build a habit, and there are seven parts to the swing that include in sequence stance/load, timing, tempo, tracking, approach, contact, extension and finish.

Skill – This is a habit you can repeat. Bat speed is a tool, while repeating the swing with bat speed and adjusting to varying pitch speeds, types and locations is a skill.

Talent – This is a natural skill. Let’s not confuse this with having natural tools. Talent is a skill, not a habit or a tool. You may be able to fly an airplane in the daytime in good weather, but flying at night and in bad weather may require a different skill.

Competition – To compete implies that both individuals or teams have equal talent. If equal talent isn’t present, we aren’t competing, because someone is only participating. Clayton Kershaw can repeat his pitching delivery and command his pitches at least 70 percent of the time. The only way you can compete with him as a hitter is to repeat your swing at least 70 percent of the time.

Work ethic – This is based on values such as excellence, humility, integrity, loyalty, stewardship and teamwork. “Hard work” makes you tired and, oftentimes causes injury, while “working intelligently” encourages and demands efficiency.

Philosophy – This is a system of behavior that governs what will be taught.

Simplistic – This is treating complex problems as if they were simple.

Complex – To complicate by asking questions

Simple – This is something that is easily understood and actionable

Words that aren’t commonly used and should be understood:

Aptitude – This is the ability to learn and apply.

Methodology – This is a sequential and intentional way of doing things to fulfill a specific outcome.

Standard – This is a required and agreed level of attainment.

Responsibility – An obligation to do something

Accountability – This means being responsible for accomplishing the standard.

Consequences – These are the results of actions or lack there of.

Three of the most important people in the system of baseball are coaches, advisors and facilitators. I liken these three individuals to the three who control our destiny when traveling on an airplane:

In next week’s blog, I will go deeper on who and what a professional baseball coach, advisor and facilitator are.