You are here: Home / About Diamond Directors / The importance role Black’s played in shaping baseball’s past and future 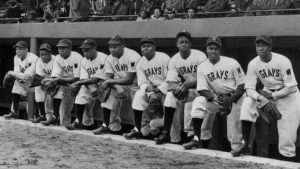 An estimated 40 percent of Negro League players had college educations. Bob Kendrick, president of the Negro Leagues Baseball Museum, says that most of them were from historically Black colleges and universities.

How important is Kendrick’s statement? It was once said that Black baseball players were not smart enough to play in the Major Leagues.

I define intelligence as knowing something and being able to do it with what you know. While being smart means you know something, but lack the ability to do anything with it. I argue that Negro League baseball players were very intelligent and resilient, which is why they were able to exist from 1920-1948.

Did you know the batting helmets and catchers shin guards were invented in the Negro Leagues?

Did you know that night games were invented in the Negro Leagues?

Did you know that Moses Fleetwood Walker and his brother, Welday Wilberforce Walker, were the first two black players in the Major Leagues. They both played for the 1884 Toledo Blue Stockings in the American Association?

To help keep your skills sharp, we have introduced a new type of Skill Build—our Virtual Skill Build, where I can help you develop hitting skills anytime, anywhere using anything. Check it out.