You are here: Home / About Diamond Directors / Should I call you Coach or mister? 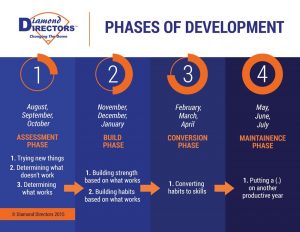 Pat Alacqua, a friend and mentor I’ve worked with over the years, once told me: “Coaches don’t coach teams. They teach and coach individuals – the team aspect is just putting in a system.”

Before the word coach was used in sports, it was only used as a means for transportation. There was a horse, a coachman and the coach where the passengers sat.

You simply told the coachman where you want to go and off you went. A good coach can do three thing:

“If you don’t know where you are going any road will take you there.”

I’ve been coaching hitters for 20 years now, and I sell outcomes. My success is based on really good training. Being trained is based on four S’s:

Systematic
A system is a set of connected things. It’s basically everything that needs to be done. As we have discussed, there are seven parts to the swing. We know it takes 3,000 reps per part of the swing to develop a habit. That’s 21,000 reps.

A good coach starts with allowing you to see all of the parts, and then assesses you so that you know the specific parts you need to develop.

“There is nothing quite so useless as doing with great efficiency something that should not be done at all.” – Peter Drucker

The fall (August-October) is the time  specifically carved out to focus on trying new things. It allows you to see what works and what doesn’t. We spend three months essentially becoming more athletic and thinking critically because people are ever-changing.

The DVD was a great thing when it came out – today, not so much.

So here’s how the calendar year breaks down for my hitters. I can assess a hitter anytime of the year and speed them up to get on track if they start with me in February. But it’s going to take commitment and discipline.

My phases of development are all about sequence, because that’s what good coaches do. Let’s revisit the seven parts of the swing again:

Simple
When something is simple, you can understand it and do it. Coaches often make things complicated out of ignorance and arrogance. At least that was the case for me in my earlier days of coaching.

If felt I could be perceived as smarter if I could complicate something that was simple. By doing so, I thought that the players and their parents would think I was really doing my job. Ask your coach if he has experienced this same thing.

Here are seven simple drills you can do, based on my Swing Map:

Coach should be more than a title – just like that of a pilot. We have a responsibility to communicate a clear system, develop the right habits sequentially and make what’s being done simple.

Specific
Anybody can shoot a gun. Get good enough and you can make shots from But Navy Seals can do it in the rain, without food with a without failure rate.

If what you’re doing isn’t being done to achieve a specific goal, you aren’t training – you’re teasing.