You are here: Home / About Diamond Directors / RE2PECT… Between the ears 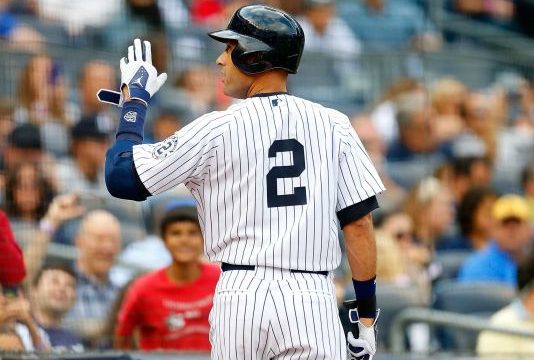 “You’re playing a game, whether it’s Little League or Game 7 of the Word Series. It’s impossible to do well unless you’re having a good time. People talk about pressure. Yeah, there’s pressure. But I just look at it as fun.” – Derek Jeter

As Derek Jeter ends his career in MLB, everyone is talking Re2pect. We respect The Captain’s impressive stats, achievements and awards he amassed during his 20 years with the Yankees. We respect his .309 career batting average. We respect his consistency, his work ethic and the reason he earned his nickname Captain Clutch.

Yet there is something that hasn’t gotten any press, because it is a hidden factor behind Jeter’s long career, consistency, success and ability to be clutch – the 6 inches between Derek Jeter’s ears. Jeter not only honed his body and swing dynamics, he also honed his brain during his long career in baseball. He had a lot of good going on “Between the Ears,” and this blog will cover three reasons that lead to No. 2’s success on the field.

Derek Jeter is a humble team player
There are some athletes who play for the passion of the sport, for the thrill of competition and the love of the game. Derek Jeter has these qualities, which is why he earned the respect of his teammates and opponents. Jeter played a team sport, and became a standout within that team. In spite of his career success and fame, he never developed an ego that, in his mind, elevated him above the Yankees. The success of the Yankees was always No. 1. He was motivated to improve for his team. Why is being a humble team player a “Between the Ears” issue? Ego takes energy. It can also become a big distraction for the athlete and team performance.

Re2pect Tip: Be a humble team player and always make your team No. 1. Don’t let ego issues rob you of energy and focus that you need for consistent performance on the field.

Derek Jeter never stopped learning
Athletes with long careers become students of the game. They never feel like they have hit the ceiling of learning and think they know it all. They stay interested, motivated and continue to search for new ways to grow as an athlete. Jeter knew there might be other players who were more talented than him, but he worked hard to continue to be one of the best. He stayed motivated to continue to grow for 20 years, and he fueled his mind and his body for performance.

Re2pect Tip: Continue to make the game fun by becoming a student who never stops learning. Always be coachable and look for new ways to improve. Keep it fresh and continue to fine-tune your mind in addition to your body.

Derek Jeter never let one at-bat or one game define him
Many athletes let one at bat or one game shake their confidence. Derek Jeter understood he played in a sport with a long season, and he would encounter performance ups and downs within that season, and even within 9 innings. You don’t earn the nickname of Captain Clutch by getting frustrated each time you strikeout. Derek Jeter struck out 1, 834 times, and he understood strikeouts were a part of the game and a learning opportunity. Did he like strikeouts or losing games? Nope, but he kept his calm and moved forward to the next at bat and game without ever losing confidence in his skills. He also understood that high levels of frustration drain the fun out of sports, and he was big on keeping the game fun.

Re2pect Tip: Don’t let strikeouts or games that don’t go your way solely define your confidence. They are part of the game, and a signal you need to make some adjustments. Gear your mindset to look for information to make adjustments and improve your game rather than beating yourself up. This mindset will help keep your confidence high, allow you to grow as a baseball player, make the game more fun and give your Clutch factor a big boost.

BIO
Barbara Greene is a sport performance consultant with Pure Performance Inc. She can be reached at 404-729-6326 or via email at BarbaraAGreene@aol.com. Follow her on twitter@BGreene1.