You are here: Home / About Diamond Directors / Practice. Play. Perform. 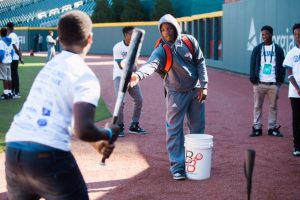 Practice. Play. Perform. These three P’s are separate, yet support each other.

Practice
Practice involves the systematic and sequential way of doing something that’s simple, so that you can achieve success when you play.

Play
Playing is when you test the habits in games that you’re working on in practice.

Performance
Performance is the execution of skills when the stakes are high, such as championship games, and in front of college or professional scouts. Skills are developed under stress for tests that invite stress.

More about playing
Baseball is an individual sport played in a team concept. You play games to win as a team. You must also use games to determine what works and what doesn’t, so that you can know what to do in your next practice.

I believe that a hitter needs at least 250 in game at-bats per year in order to remain competitive. Success during these at-bats should be based on them being productive, which leads to the outcome that we all want – lots of hits.

A productive at-bat is based on four things happening:

More about performance
It takes 10,000 of deliberate practice to develop a skill. Think about Martin Luther King., Jr., giving speeches. Michael Jackson entertaining sold out crowds or Derek Jeter getting the game winning hit in the World Series on several occasions.

All three of these icons have performed over 10,000 hours.

As a professional instructor, I’ve trained hitters for over 30,000 hours. Can you see where your priorities are?