You are here: Home / About Diamond Directors / How managing the mundane gets you ready for the game 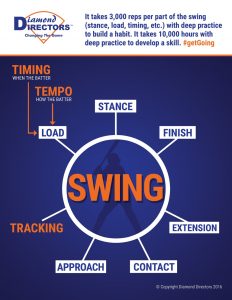 Bestselling author Travis Bradberry once said, “Our days are filled with a constant stream of decisions. Most are mundane, but some are so important that they can haunt you for the rest of your life.”

When something is mundane, it is dull. For the past eight years, I’ve been publishing blogs like this every week. In most cases, writing a blog can be dull—mundane. I write them because I have to do it—it helps me further explain my philosophy and engage with my students. Discipline is all about doing the things you don’t want to do, but you have to do.

There are millions of young men who dream of playing in the Major Leagues, but that will never happen if they are unwilling to do things that are mundane.

Soldiers cannot be armed for battle until they prove they can make their beds and clean their boots. Children will never learn to read if they don’t learn their ABCs.

Is developing the skillset of being on time a mundane task? How many hours have you deliberately focused on being on time?

And as we know, skills pay the bills.

Watch this video I made about timing and start concentrating your efforts into improving the skillset.