You are here: Home / About Diamond Directors / Determination + Grit + IT = Elite Hitting Status

The World Series has been over for a couple weeks now, and my MLB clients are back in my Hitting Lab building habits and strength. Unlike amateurs, they are very committed to being elite hitters. That’s because they posses grit and have, what I call, the “IT” factor.

Let’s take a look at what it takes to reach Elite Hitting Status and obtain that “IT” factor:

Commit
To commit is to carry a task out. All hitters begin as a enthusiastic beginners and, after a short period of time, lack the commitment that separates them from elite behaviors. Here are three reasons why I struggled with commitment as a pre-teen through adulthood:

What is the main cause for your lack of commitment?

Grit
Grit is strength of character. Entitlement and instant gratification is pervasive among today’s youth. I don’t blame them, because adults have built this trap for them. We are the problem. The few coaches that held me accountable for my actions helped me become aware of the character I needed to become a better human being and professional baseball player. Their constant accountability forced me to develop grit. Here are three simple things you can do now to develop grit (strength of character):

After you perform the Chair Drill, journal for five minutes. Write down how the drill made you feel, and how it helped you maintain excellence, humility and integrity character traits.

The character trait that defines this task is integrity, which is doing the right thing even when you can do the wrong thing.

Check out this video to see what separates NAVY Seals from everyone else – grit. 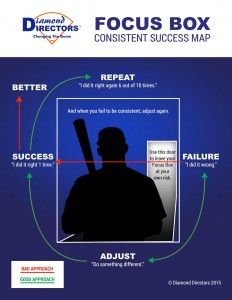 IT
Derek Jeter has IT. Lebron James and Serena Williams also have IT. When you cut IT open, what’s inside? IT is intelligent thinking. I can teach a monkey to swing a bat and, in short order, can help it hit a moving ball. Hitting really isn’t that hard if you’re intelligent and know how to think.

Intelligence
Intelligence is knowing what to do, and then being able to mentally and physically do what you know how to do.

Thinking
Thinking is the directing of ones mind toward something. Elite hitters are critical thinkers. They can make complicated things become simple quickly. Here’s how you should think: