You are here: Home / About Diamond Directors / 3 ways every pitcher will try to exploit you (and how to beat him) 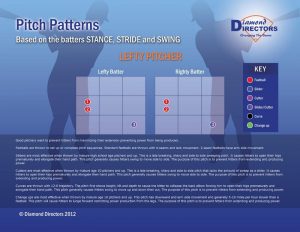 The top three things that pitchers are taught to exploit when competing against hitters is their stance, stride and swing, in that order.

Below is a breakdown of what they are trying to do and how you win the battle:

Stance
The batting stance is under coached. It doesn’t require a lot of focused practice time, but hitters need to know that good pitchers are watching how they stand in the batter’s box to determine what pitch to throw.

Before I go deeper, let me bring to your attention that there is a difference between a pitcher and a thrower. A pitcher has command of a pitch type as well as an understanding of when to throw it.

When I coached my 10U East Cobb Seminoles team in the early 2000s, I had to signal the right pitches for my pitchers to throw based on what I saw from the hitter’s stance.

One of those players was Kent Emanuel, who later went on to pitch for the University of North Carolina Tar Heels and currently is a AAA pitcher in the Houston Astros’ organization.

Stride
The stride of the hitter is watched very closely by a catcher who is aware.

Swing
The swing in general consists of seven parts. For the sake of teaching in this section, I’m specifically referring to the approach part:

As a hitter, you could have a good stance and stride, but a swing that’s too long or too late will cause you to struggle.

Study these videos so that you’re prepared to compete against pitchers who try to exploit your stance, stride and swing.